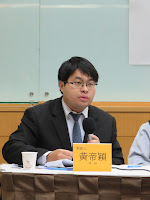 Shih Hsin University’s Lifelong Education Center signed a letter of commitment that it would not promote “one China, one Taiwan,” “two Chinas” or Taiwanese independence.

This letter, which amounts to supporting the “one China” policy, contradicts Article 11 of the Republic of China Constitution, which says: “[T]he people shall have freedom of speech, teaching, writing and publication.”

The letter is unconstitutional and has no binding power over lecturers or students.

According to the Council of Grand Justices’ Constitutional Interpretation No. 380: “The provision regarding the freedom of teaching provided in Article 11 of the Constitution is an institutional protection mechanism for academic freedom. Such provision shall encompass the freedom of research, instruction and study, etc, in the field of college education.”

The Constitution guarantees academic freedom, including the right of professors to teach and conduct research freely, as well as the right of students to study freely.

The letter of commitment signed by Shih Hsin University restricts the content of lecturers’ instruction and students’ study direction, which violates the guarantees expressed by the Council of Grand Justices, and therefore should be declared unconstitutional and null and void.

If Shih Hsin University professors have any academic conscience and strength of character, they would sue the university for violating their constitutional right to freedom of instruction if the school interferes because their instruction touches upon “one China, one Taiwan,” “two Chinas” or Taiwanese independence.

This is clearly stated in Constitutional Interpretation No. 736, which concerns the right of school teachers and university lecturers to judicial remedy.

Of course, if the school in violation of the Constitution interferes with students who express the opinion that there is not “one China,” the students could also sue the university for violating their constitutionally protected right of instruction and freedom of expression in accordance with Constitutional Interpretation No. 684, which states that: “When a university makes administrative decisions or other public authority measures for realizing educational purposes of seeking academic truth and cultivating talents... if the decisions or measures infringe the student’s right to education or other constitutional rights, even if the decisions or measures are not expulsions or similar decisions, based on the mandate that where there is a right, there is a remedy under Article 16 of the Constitution, the student whose right has been infringed shall be allowed to bring administrative appeal and litigation and there is no need to place special restrictions.”
張貼者： 永社TFA 於 上午10:00