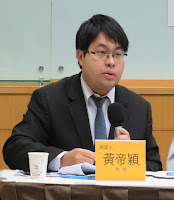 On Tuesday next week, the Judicial Yuan is to decide whether it would issue a constitutional interpretation for the Act Governing the Settlement of Ill-gotten Properties by Political Parties and Their Affiliate Organizations (政黨及其附隨組織不當取得財產處理條例), following a complaint by the Control Yuan.

Ever since the promulgation of the act, people from the party-state elite and vested interests have said it is unconstitutional, ignoring that the legislation follows Germany’s transitional justice laws.

Even more absurd is the Taipei High Administrative Court judges calling for such a constitutional interpretation, although the request has no merit in terms of democracy and the rule of law.

Leaving aside the issue of the Control Yuan members appointed by former president Ma Ying-jeou (馬英九) submitting this request for a constitutional interpretation in a case that has nothing to do with the powers of Control Yuan members, the Council of Grand Justices must reject the complaint from these party-state Control Yuan members — who are only intended to protect the party assets — because it does not meet procedural requirements.

Even more objectionable, the judges’ call for a constitutional interpretation completely ignores the laws in Germany and other democracies in Europe, as well as those in the US.

They are calling the act unconstitutional without investigating the facts in accordance with the law, which harms the public’s respect for judges.

When Taipei High Administrative Court judges Lee Yu-ching (李玉卿), Chung Chi-wei (鐘啟煒) and Lee Chun-hao (李君豪) submitted their request for a constitutional interpretation, they were of the opinion that addressing the party assets issue only requires a civil lawsuit, fully ignoring that Germany resorted to special legislation to be able to resolve the statute of limitations issue.

Even more absurd, all they had to do was to search the Control Yuan’s verdict database to find out that a simple civil lawsuit would not be sufficient to resolve the party asset issue, which originated during the authoritarian era and whose statute of limitations has already expired.

In addition, a civil verdict states that “based on concerns of legal stability and since the statute of limitations and exclusion periods already have expired, and since it is possible that a third party has obtained the rights, it could in practice be difficult to meet the principles of the rule of law, so it seems that the only feasible way is to create special legislation to make the Chinese Nationalist Party [KMT] fulfill its duty to return its ill-gotten party assets.”

It is clear that the judges filed the request on the KMT’s behalf without conducting even the most basic research, such as searching previous verdicts.

Even worse, the trio claim that the act is directed at a specific political party, namely the KMT.

This contradicts the facts, as the first party to be fined by the Ill-gotten Party Assets Settlement Committee was the Democratic Action Party, not the KMT, when it was fined NT$1 million (US$32,762 at the current exchange rate) by the committee in its first administrative fine on April 27.

This could also be easily verified online, but the trio failed their duty to conduct due diligence, which only goes to show that a few judges are making emotional decisions aimed at protecting ill-gotten party assets.
張貼者： 永社TFA 於 上午11:00